What's a wedding without the next generation? 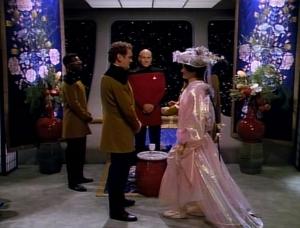 What’s a wedding without the Next Generation?! *
*This Star Trek joke is an anniversary present to my husband.*

Everyone who’s ever been married has spent days, even weeks, staring miserably at a list of people they’re related to, went to school with, or have some meaningless (to them) but crucial (to their parents) importance that means they simply cannot be left off the list.

Culling the list is difficult. Everybody matters. It’s not known whether George Orwell was preparing for a wedding when he wrote Animal Farm, but in wedding planning, some animals are definitely more equal than others, and the smaller they are, the more ruthless you can be. Children are less likely to bear a grudge about not being invited, after all – and it seems, their parents aren’t too bothered either.

A survey conducted by MummyPages.ie found that 61% of married Irish women invited children to their weddings. But when they did, over half of parents didn’t want to bring the kids anyway. It’s easy to see why – nobody wants to be dragged outside by a sulking six year old just as the best man gets to the juicy bit in the speech, or halfway through Rock the Boat – but to me, something is lost from a wedding when there are no children present. And if they do get upset or bored, it’s always a good idea to have a room in the venue with a babysitter present so there is somewhere else for them to go, away from adults, drink and bad dancing.

It’s only now, a year later to the day, that I look back at the photos of our wedding and see how much fun the kids added to the day. We had young cousins, nieces, nephews and neighbours, and as well as being remarkably cute in the photos, they gave us a great excuse to bring along a vintage Japanese fire truck owned by a relative (I had more trips in it than any of them), they had immense fun with the band, and they even kept the DJ entertained when he played to an empty room because everybody else was outside.

Although we didn’t have a traditional wedding, and everybody’s idea of what marriage is about is different, weddings are about bringing together two people – and their families – and how can you celebrate love and family without including the next generation?

I’ve been at a few weddings where the bride and groom had children, and they were central to the day. Something that used to be frowned on, having the couple’s children involved in the ceremony, is now one of the loveliest elements of many celebrations. Although it may mean lying to the priest about the child’s identity until the wedding day (I’ve seen this done, and it’s quite something to watch a priest realise they’ve been hoodwinked), there is nothing more emotional than seeing a couple’s children help them celebrate their commitment to one another.