I’m in Gran Canaria this week on holidays with my mother. We’re staying at a nice resort, in a lovely apartment, and we’re 100% conscious of our comparative wealth here in a way I’ve never been in a country of ‘old Europe’ before.

On (budget) trips to Morocco, Egypt, and even Hungary, I have been super conscious of not being seen to flaunt wealth, of the gulf between holiday makers and our hosts and of the lifestyle we have versus that of the people paid peanuts to smile ingratiatingly at us as we eat food they can’t afford.

It makes me uncomfortable, but I always weigh it up and decide that tourism is a positive. It’s visible trickling-down.

Having the same feeling in Spain is strange.

I’m not wealthy, even by current Irish standards, but I am here, nonetheless. And boy do they need us to be here.

Puerto de Mogán, where we’re staying, is a beautiful little fishing village with some rather ugly modern hotel and apartment developments marring the surrounding cliffs. There is a Lacoste shop and some very nice restaurants – in short, it’s the kind of place that was ‘exclusive’ when there were hordes of tourists to push towards slightly less salubrious resorts in other parts of the island, and save the place for the real spenders.

Today, though, there’s a half built shopping centre (will it ever be finished?) in the centre of the recently built plaza, with most of the finished units empty or housing cheap Asian-made souvenirs in place of the boutiques they were obviously hoping for.

Most of the units away from the beach are shut up, and the restaurants, while retaining some customers, are by no means full. It’s off peak, of course. And it’s still a beautiful place to be.

But according to the pleasant North African man who sold us a pair of sunglasses yesterday – and, politely, let us know that we could be his only substantial (€25) customers that day – things are very, very quiet. “Things are very bad in Spain”, he said.

The same from Esther, the cleaning lady, whose smile lights up her face when she catches me, again, in the room when she comes to clean it (Does anybody know the etiquette in this situation? I think the balcony is a safe refuge after she clucks at me a couple of times).

Esther’s brother, a former bank official, works in London now, she told me. As a cleaner.

This is the kind of thing we are used to hearing, from ‘new Europe’. When I mentioned it on twitter a couple of people said “yes, I know a Polish cleaner who is a pharmacist” and that kind of thing. But is this a common story from Spain?

The country currently has 26% unemployment – higher than in the US during the depression – with 50% unemployment among the youth. That’s an awful lot of people affected by austerity. Starting wages for a graduate – if they can find a job – are about €800 per month here.

Without an open economy like ours, without English as a mother tongue, without emigration as a ‘valve’, how is Spain going to get out of this? 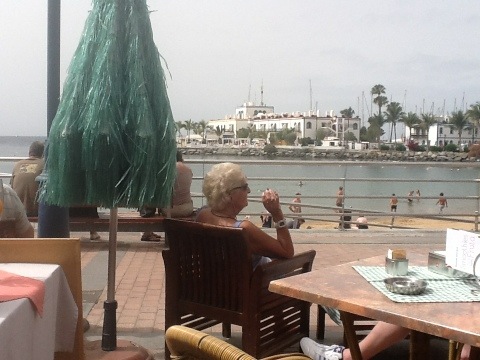