Send nudes? Not on your life

As my son grows from a baby into a toddler I have realised that parenting mainly consists of finding something new to be afraid of at least once a day.

While romance is a long way in his future, a study I came across yesterday about how teenagers are now approaching relationships struck fear into my heart, as well as reigniting the feminist rage that seems to live there permanently now.
Two-thirds of girls aged between 12 and 18 interviewed for the study, at Northwestern University in the US, have been asked by a boy to send nude pictures.
‘Send nudes’ has become common parlance online. Despite my last foray into the dating world being almost half my life ago, I see ‘send nudes’ regularly in the form of jokey comments on social media, as part of memes and dropped into conversation as a sort of shorthand for how hot someone is looking.

Every generation thinks it is the first to discover sex, and I’m not so old that I don’t remember how intense teen flirtations are. A heady mix of hormones, peer pressure and the urge to discover what adult life is like can make teenagers do some very strange things.
Luckily though, mobile phones were in their infancy when I was a teenager. Suggestive texts were about as far as it got, and you can’t put anything in a text that earlier generations didn’t put in love letters. Only immediacy distinguished between our communications and those of earlier ages.

The changes that have happened since those innocent days of the early 2000s have changed our culture so profoundly, though, that it’s hard to know where to start.

The pornification of women’s (and some men’s) bodies has reached levels we couldn’t have dreamed of. Cosmetic treatments once the preserve of only the craziest Hollywood stars are now pretty much normal among even young women.

Although the sense of entitlement young men have always had over young women’s bodies hasn’t changed, photo messaging apps are just another through which they can exert pressure and demand results. Demanding and sending nudes is yet another form of sexual exploitation that young women are taught their responsibility to resist.

But who is teaching young men not to coerce them? Who is teaching them that girls are not objects for their pleasure but thinking, feeling human beings with wants and needs and sensitivities of their own?

When I was a teenager girls were given dire warnings about STDs and our responsibility to say no, while boys were sent outside to play football.
That pressure hasn’t changed. We still divide boys and girls into poachers and gamekeepers and warn the gamekeepers that poaching is inevitable but that failure to stop the poachers will mean they lose everything.

What do boys lose by pressuring them? Nothing.

One girl in the study – aged fourteen – told the researchers that her boyfriend had asked her for nude pictures very early in their ‘relationship’, and she now regretted giving them to him. He had warned her if she didn’t send more and more explicit images, he would send the originals out, far and wide, and destroy her. Damned if you do, damned if you don’t.
We have come such a long way in teaching about consent. Lessons in sexuality, coercion and consent are not just taking place in university classrooms these days but in every household and even in workplaces. At a business event recently I found myself discussing with two middle aged male colleagues their disquiet at the world post-MeToo and their re-examination of interactions they’ve been having for years.

It’s not just a matter of teaching young people about power balances and consent. We have to re-examine our own way of framing these debates. Girls should always feel empowered to say no, but why should it ever have to go that far? What empowers boys to demand, and why is it so acceptable for them to rain down the modern version of hellfire and damnation – condemnation on social media – on girls who dare to refuse?

The nuns taught us that the basis of every interaction should be respect for other people and ourselves. But the distance that online interactions provides allows even adults who knew a world before Twitter to entirely depersonalise and objectify each other. 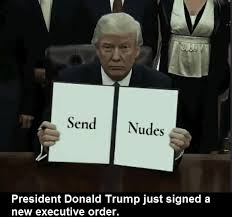 Don’t send them to this guy. The creep.

So, while the respect rule is one for the ages, perhaps we all need a reminder that to respect each other, first we need to see each other as people, not usernames or collections of body parts. Then maybe we can teach it to our kids.