Rwanda’s women get ahead, while Ireland prepares for quotas 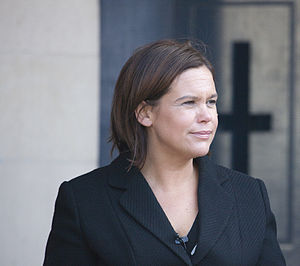 Mary Lou McDonald had to fight for maternity leave from the Dail – there is currently no provision for this. (Photo credit: Wikipedia)

I wrote this piece in March after a trip to Rwanda to meet women politicians there, and after spending about four months shadowing and interviewing women politicians in Ireland. I just realised it hadn’t been posted but think it’s probably as relevant this week, as the institutional sexism in Leinster House has come under scrutiny.

As Irish political parties struggle to get their heads around having to run 30% women in the next general election, Deirdre O’Shaughnessy met women in politics in Ireland and Rwanda – where women politicians are a majority – to figure out just what Ireland is missing.

It’s Thursday, and Aine Collins, a TD for Cork North West, begins the day with an 8am meeting in Leinster House. Later in the day, she hightails it down south, driving herself to three separate meetings throughout Cork city and her constituency.

Like all rural TDs, she’s been in Dublin since Tuesday morning, with the Dáil sitting the night before until around 9.30pm.

We meet again at 7pm in her constituency office in Millstreet, where her secretary has correspondence for her to check before she can finish for the day.

She gets a rapturous reception from five year old Thomas and three year old Lily, who has CF, at about 8pm; they haven’t seen her since Monday night. Her older daughter lives in Australia.

Aine’s husband works in finance, and she says it would not be possible to sustain two jobs like theirs without their childminder, Myrna, who’s originally from the Philippines.

Having run her own accountancy business since she was 26, Collins doesn’t see a huge difference between her current workload and her previous responsibilities.

Collins is one of few women TDs with young children; Sinn Féin’s Mary Lou McDonald is another. As deputy party leader, her schedule is hectic, and the only time she’s available to meet is at lunchtime during a Saturday conference for Sinn Féin women.

Unlike Collins, when McDonald first ran for election she had no children.

Having been the first pregnant TD in Leinster House and the first pregnant MEP (there is no entitlement to maternity leave in either parliament and no system of substitution) she faced a storm of controversy over her attendance record for parliamentary sittings in Brussels and Strasbourg.

“Politics is not catered for women of child-bearing age,” she says. However, she says her party will not let this Dáil term pass without introducing legislation providing maternity leave for politicians.

She cites the support of her husband and her mother as essential, and says she felt enormous guilt when her children were very young.

“My husband Martin is a full on housekeeper, father, taxi driver, hurling instructor, confidant… I’m really, really fortunate that I have that, and I’ve said to others, I wonder if I were parenting alone would this life be possible, and the answer to that is no, in my view. I just don’t think it could be done.”

On returning from maternity leave, a male TD asked where she’d been. She pointed out that she’d just had a baby. He looked at her, askance.

Minister of State Kathleen Lynch had four young children when she first ran for election. She says the guilt was always there, but it’s become a bigger factor.

In Rwanda, women head 30% of households, because of the destruction wrought by the country’s 1994 genocide. Much of the rebuilding had to be done by women, but at the time they could not even own property. President Paul Kagame, whose RPF party took power after the genocide, is a firm advocate of equal participation, and all the women interviewed point out that women were central to his civil war victory.

19 years on, the country tops the chart on women in politics worldwide, having introduced a strong element of positive discrimination to its constitution of 2003 in both electoral politics and government institutions.

The Speaker of Rwanda’s Chamber of Deputies (similar to our Dáil), 52 year old Rose Mukantabana, was widowed in the genocide. The softly spoken lawyer raised her own two children and six orphans she took in, alone.

She says it was difficult, but the situation of Rwanda left her no choice but to get involved.

“It is difficult particularly as a widow, I have a heavy charge at business and family level. But I’m committed, I’m not complaining. I enjoy my position… It was my ambition.”

“If women are not committed to take their right place, no-one can do it for them.”

Dr Odette Nyamarilimo, who we meet at her airy, modern office overlooking Kigali, is a former Minister of State in Rwanda and now a member of the East African Legislative Assembly.

Nyamarilimo points to property rights as the most important advance for Rwandan women.  For her, maternity leave is not a big priority.

“I was a university student when I had my first child and the third day after I delivered, I sat an exam and then continued working. For my second-born, both my husband and I were doctors. After one week I could go back to work and help, so I didn’t take a leave.

“I took a leave only on the third, for three months, and in the third month I was really annoyed at home! I found it heavy, and very depressing.”

She points out that most women who work in Rwanda can afford some kind of help at home. Developing as quickly as possible is Rwanda’s priority, she says.

“Even my servants have also servants,” she says.

This, it seems, is the case; at our hotel, Immaculée Ingabiro, who serves us breakfast, tells us her two year old daughter is looked after at home by her ‘house girl’.

For the time being, says Nyamarilimo – while there are still many uneducated girls – this situation can continue. But she knows that it will become an issue eventually.

MP Juliana Kantengwa, who was taught by Irish nuns as a refugee growing up in Uganda, and can’t understand why Ireland has so few women politicians, acknowledges that Rwanda’s growing middle class means childcare will soon become an issue. Men still don’t participate equally in the home.

“My husband is not working at the moment. We have one child at home still and… he does participate… when she is sick, he cares so much he calls me!”

However, according to one Rwandan woman we meet who is working in the private sector, gender is no longer an issue for the country’s political framework, but age is. The median age of Rwandans is 18.7 years, but there are few politicians under 50.

In the private sector and in public administration here, young people are quickly promoted if they are educated and show promise, largely due to the skills gap caused by the genocide. But in politics, most of the main players are well past childbearing age, with different priorities.

In Ireland, just 15% of TDs are women (note: this has improved slightly with the election of Helen McEntee), and only two women Ministers sit at the cabinet table, with none on the cabinet’s most important sub-committee, the Economic Management Council. Fianna Fáil, which, according to recent opinion polls, is once again Ireland’s most popular political party, doesn’t have one woman TD.

The traditional barriers to women entering politics have been cash, confidence, childcare, culture and candidate selection. Quotas are intended to tackle candidate selection, and the theory is that critical mass achieved by quotas will look after the rest.

Both female Cabinet ministers – Joan Burton and Frances Fitzgerald – had their children before entering politics. Both believe childcare is a major issue that needs to be addressed, but also that quotas will change legislative priorities.

Minister Frances Fitzgerald believes Irish political culture is “very male” and is proud of the quota legislation introduced by her party colleague Phil Hogan. She says she wouldn’t have wanted to be a minister when her children were under ten.

She also cites other changes to the political system as improving women’s access. Cash has traditionally been a barrier, but funding changes have altered that. Very few politicians fundraise privately now, she says.

“It used to be about buying drinks for everyone but funding rules are now stricter and that’s a good thing for women.”

In Rwanda, attempting to buy drinks for your voters gets you struck off the party’s list, according to Rose Mukantabana. The list system also means there’s less personal campaigning, but presents its own challenges in terms of maneouvring within the party to get a good spot on the list.

Fitzgerald believes that measures such as the free year of childcare and after-school childcare places are hugely important, saying “it’s an issue for men as well”. Flexibility, she says, is the aim, with paternity and parental leave needing to be part of the mix.

Minister Joan Burton – who visited post-genocide Rwanda as Minister for Irish Aid in the mid-90s – acknowledges that the Dáil is a boys’ club.

“Leinster House… is heavily dominated by men. It’s quite clubbish almost in an old fashioned way,” she says. “To be honest, you just have to get on with it.”

Mary Lou McDonald agrees. “It is a boys’ club; it couldn’t be anything other than a boys’ club.”

Joan Burton’s daughter was 11 when she was elected to the Dáil. She made it her business, she says, not to hang around once the work was done; something she acknowledges is a lot more difficult for TDs outside Dublin.

The daily life of politicians in Ireland is made up of a whirlwind of constituency queries, public meetings, committee meetings, Dáil sittings, funerals and social events that they can’t afford not to attend. For those outside Dublin, not being at home for three days a week means weekends are often filled with constituency clinics and it can be very difficult to find family time.

By contrast, Rwandan legislators are based in the capital, Kigali. They are not elected by geographical constituencies but should represent the interests of a district once elected, which they visit once or twice a month. When parliament is in session, late hours are not the norm but are worked when required.

But the availability of domestic help at a low cost and the fact that for most, work is a few minutes down the road, are both inestimable advantages; in many ways, politics in Rwanda is just like any other job.

On quotas, all the Rwandan politicians we meet are emphatic. They have worked, and they continue to work. According to Agnes Mukabaranga, that’s due to political will.

“My view is that quotas will probably disappear one day because now women are aware that school is a must, knowledge is a must.

“One day it will not be a need in our constitution. For the transitional period, affirmative action is a starting point. “

In Ireland, affirmative action is happening a generation after democracy was introduced.

According to Minister of State Kathleen Lynch – a longtime campaigner for quotas – there will only be one way of telling when quotas have succeeded.

“Seeing women in positions that you have never seen them before, and accepting them as commonplace, not turning the head… that is critically important. It’s that critical mass, that this is normal, this is what we do… it’s vital.”

“The day an average woman gets elected to the Dáil, that’s when quotas will have worked, because there are plenty of average men in there.”