Our health system is held together with sellotape 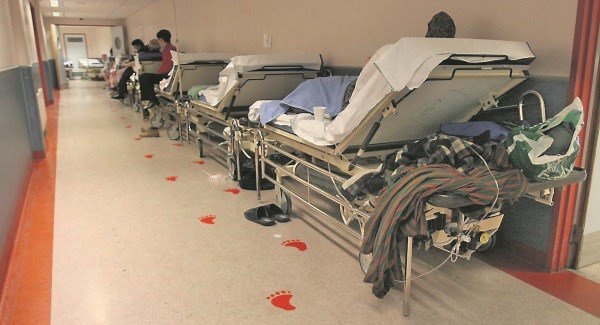 The unspeakably tragic death of Marie Downey and her newborn son Daragh in Cork University Maternity Hospital this week has yet again thrown under the spotlight the appalling resourcing of our health service and the conditions under which staff are expected to manage critical incidents.

I have spoken to nobody this week who is not haunted by this awful incident, and almost every conversation has turned from the pain of the family to the trauma of the staff who went to work as normal that day and came home with that horrific memory forever in their minds.

When newspapers revealed on Friday that just three midwives – one permanent, one from an agency, and one just recently qualified – were caring for 31 women who had recently given birth, women around Ireland nodded knowingly. (The report, interestingly, did not count the babies in patient numbers, so presumably the real figure being looked after was at least double that).

Because anybody who has been in the maternity system, or indeed in any hospital, in the past few years knows just how little time those caring for patients have to spare.

On the night in September (peak baby season) I gave birth to my son, the incredible midwife who delivered him was under severe pressure, and her competence and professionalism under that pressure was astonishing.

Women who have recent experience in the maternity system will tell you of ringing the hospital in labour to be told stay at home until you possibly can, waiting in the reception area in active labour because there is nobody available to process them or help them labour, and having very little assistance post-birth even when weakness and surgical wounds mean they are unable to lift their babies to feed or change them. It’s not because of cruel or uncaring midwives. It’s because they are so busy doing the absolute basics that they have no time for niceties.

More recently when I spent two nights on a trolley in A&E, I saw first hand how overwhelmed and understaffed the mainstream hospital system is. NCHDs making life and death decisions on the fly after endless hours on duty, nurses rushed off their feet doing all the duties required of A&E plus effectively running wards on corridors, and terrified, seriously unwell patients having to trust that this chaos would provide a safe space to heal them all combined to make it stressful and dangerous.

But it’s not just in our hospitals that the system is being held together with the sellotape of agency contracts, often unpaid student labour and inexperienced, newly qualified professionals who are being thrown into the deep end.

From the ground up the health system does not match the progress we are told we are making, particularly in the area of women’s health.

After years of bitter and divisive campaigning and a decisive victory for women’s rights and women’s healthcare, abortion is now legal, and in theory we have one of the most accessible systems in Europe.

But GPs are in crisis with patients all over rural Ireland unable to access a local doctor, and no sign of retiring medics being replaced as junior doctors take one look at the HSE and head for the hills.

Abortion on demand at your local GP isn’t worth much if you don’t have a local GP.

The theory is not matching the practice.

Women are being told to breastfeed by health professionals and expensive ad campaigns. But essential supports as basic as a midwife with time to show them how to hold the baby to feed it are not available in many hospitals, while the provision of lactation consultants is patchy at best.

Women with concerns about their smears following the revelations about Cervical Check were offered reassuring re-tests. The Government paid tribute to campaigners and promised to do better.

But general practice has been overwhelmed with appointments for smears following a badly communicated message around the service’s reliability and this week it turns out that many of those re-tests cannot be processed  because of hold ups in the system.

From a Government obsessed with spin, it should hardly be surprising that the talk on women’s health is not matching the reality that women (and men!) are in danger when hospitals are understaffed, general practice is under resourced and overwhelmed, and waiting lists are getting longer and longer despite numerous attempts at recategorising, renaming and massaging them.

Much like the housing situation, there is only so many times that you can say you are fixing the problem without doing anything to address the underlying issues, and have people believe you.

Blue sky thinking is a great phrase for marketing agencies and PR strategies, but when you apply it to real people in life and death situations it takes more than buzz words, launches and announcements to actually change things.

It takes listening to the people who do the actual work, listening to those who have experience of it, and working with them to change it. Nurses and doctors have been telling us for years that patients  are in danger because they are so over stretched. And while we do not know, and may never know, whether this week’s tragedy at CUMH could have been prevented, it would be wise for someone to start listening to them.