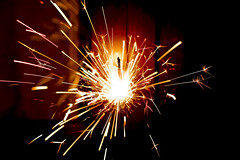 I spoke to Dave Fanning last Saturday about New Years’ Resolutions, after writing this for last week’s edition.

There’s one new year’s resolution we all should have. Give up smoking? Give up drink? Give up chocolate? Give up watching the soaps? No.

Every single year I find myself trapped in a cycle of guilt and pressure, where I resolve to give up sugar, lose a stone, drink less, eat less, watch less TV and generally turn myself into some kind of boring, under-stimulated stick of celery with nothing to say except how I’m getting on with resolutions nobody is interested in.

If you don’t have life-threatening habits, why ditch them? Let yourself live a bit, and enjoy everything in moderation.

(Disclaimer: If your bad habit is extreme eating, drinking before breakfast or smoking four packets of cigarettes at a time, then you probably need more help than you’ll get here.)

In this week’s edition, instead of the usual ‘new year, new you’ guilt-fest exhorting us – mainly women – to lose weight and fit into an imagined bikini, we have a feature on going back to education.

The two people interviewed in this week’s edition of our Adult Education series (more to follow over the coming weeks) are people whose joy and pleasure in what they are doing radiate from the page. They are inspirational, because they have taken a chance on themselves, and it has paid off; they love what they’re doing and it has given them a new lease of life. They are not depriving themselves of anything; rather, they are giving themselves the luxury of learning and new circles of friends, environments and ways of living.

We put so much pressure on ourselves to do things we think other people want us to do. If something – an activity or relationship – that’s supposed to be enjoyable has become a pressure rather than a pleasure, that’s when you know it’s wrong for you.

So this year, I’m resolving to do things I love. I’m hoping to study, and get more fresh air, and to say no to things I don’t want to do, when it’s not going to hurt or upset anyone I love.

Those are things we can all do. Make your new year’s resolution for 2013 to do what you love and get the most from your year. Happy new year!

Listen to me talking to Dave here.