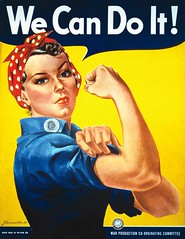 This week, Fianna Fáil launched a plan to get more women involved in the party. Senator Averil Power, one of the party’s two female Oireachtas members, launched the plan with party leader Micheál Martin and Niamh Gallagher of Women for Election, a non-partisan training body that is focussed on improving women’s participation in politics.

Deputy Martin said a “fundamental cultural shift” was needed to attract more women into politics. I couldn’t agree more. Of course, it’s over a year since gender quotas became law, applicable at the next general election, and Fine Gael has been actively recruiting female branch members and potential candidates.

The measure was introduced by that noted feminist, Phil Hogan. Minister Hogan is renowned for his electoral strategising, and he’s probably realised that diversifying tickets won’t do any harm, and may in fact improve Fine Gael’s vote in certain constituencies. He might even be paying attention to the numerous academic studies proving that women candidates work harder to get elected, and once they are elected, achieve more.

The Labour Party has had internal gender quotas for years, which is why it has always had a larger proportion of female TDs than the bigger parties.

Deputy Martin reportedly told press that there would be some difficulties selling the idea of a balanced ticket to elements of the party faithful. That’s strange, because if they don’t hit 30%, the party faithful will be the ones shaking the change from their pockets outside Mass to make up the funding shortfall.

The quota legislation – the Electoral (Amendment) Political Funding Act 2012 provides that 30% of a party’s candidates must be women in the next general election, rising to 40% (with no more than 60% of either gender) by the next election. Otherwise, the party could lose half its public funding.

Fianna Fáil is seeking to attract women not out of choice, but of necessity. The party is merely preparing to comply with electoral law, and trying to generate a bit of positive PR out of it.

With an entirely male grouping within the Dáil, Fianna Fáil has found itself at a disadvantage in this year’s most emotive debates, those on abortion and the Magdalene laundries. The lack of women on its team, particularly when the other opposition groups have such strong performers in Mary Lou McDonald and Clare Daly, is a gaping hole in Fianna Fáil’s armoury.

Averil Power has performed well in a range of media appearances, but will end up exhausted and pigeonholed if she is sent out to debate about every single ‘women’s issue’, while the rolling out of former minister Mary O’Rourke in the media on successive gender quota debates has not done the party any favours.

This sudden raft of female-focussed activity feels unpleasantly like somebody did a focus group, realised the 52% of the population made up of women is not being catered for, and banged out a few cuddly, female-friendly press releases.

The bill promoted by Senator Mary White that would allow men to share in maternity leave, as well one from Deputy Dara Calleary to allow female TDs take maternity leave, are both laudable. But both these representatives were in the Oireachtas before, in Government, when they had half a chance of passing a bill.

Announcing the ‘gender equality’ plan, Power pointed out that Fianna Fáil has fewer incumbents than ever before and this presents opportunities for new candidates, especially women. Of course, that’s true. But equality of opportunity doesn’t always mean equality of outcome – all quotas, voluntary or legislative, do, is provide a platform. Genuine support from the party is crucial when it comes to actually getting elected.

The ‘old guard’ Martin hinted at having to ‘bring along’ is key in implementing any electoral strategy. They’re the canvassers, the constituency chairs and the unofficial advisers. They’re the men – mostly – who helped elect Haughey, Ahern and Cowen. Without their support, there’s not much ‘party’ left to go around for new candidates.

What’s hard to fathom, for anyone who is familiar with youth political parties, is what is happening to the women. Because there are plenty of them in Ogra. Accountant Kate Feeney from Sligo is currently the organisation’s President, and is the first woman to hold the post, but there has always been a strong female element in the college and youth parties. The question is what happens to them after they leave college – perhaps, rather than wasting time launching strategies, the party should be investing in the people who are already there.

Bringing in ‘one-third’ women for next year’s local elections is a necessary dummy run for the next general election, in which it be hard-pressed to identify enough women nationally to fulfil that mandate. In 2011, Fianna Fáil ran 70 candidates, of whom only 11 were female. Of those 11, six were sitting TDs. In most constituencies, it didn’t run any women at all.

There are numerous problems with Irish political culture, particularly where women are concerned, but sexism is not the only issue here. Politics has been discredited in so many ways in Ireland – not just by Fianna Fáil, of course – that reform is necessary, and welcome. The problem is that genuine reform is not what we’re getting.

The disingenuous way this new plan has been launched – it gave me a mental image of Deputy Martin gussied up as ‘We Can Do It’ Rosie the Riveter, wearing a winning smile and a headscarf and flexing one bicep – smacks more of old-style Fianna Fáil spin than of any real commitment to change.