Fyre and Brexit have a lot in common

A scam benefiting a few rich chancers, supported by some orange squares. The pernicious influence of ‘positivity’ and ‘getting things done’ flying in the face of all realism. A determination to do the impossible, against all expert advice. And leaving the innocent inhabitants of an island nation penniless and unhappy after a lot of goodwill and cooperation. 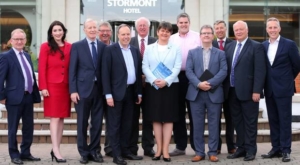 You’d be forgiven for thinking I’m talking about Brexit, but I am of course talking about the Fyre Festival, the disastrous elite music festival that is the subject of Netflix’s latest hit documentary.

If you inhabit the world of social influencers you’ll have come across Fyre either in the breathless anticipatory stages, as models like Emily Ratjakowski and Kendall Jenner posted mysterious pictures of orange squares on their instagram pages with the #fyre hashtag. The hype and momentum built to a crescendo when viral ads were released showing the world’s top models partying on a deserted beach in the Bahamas with the festival’s progenitors, rapper Ja Rule and ‘entrepreneur’ Billy McFarland.

McFarland, at the time, was the Next Big Thing, after making a mint (although, in true Trump style, probably not half as much as he said he’d made) selling fancy credit cards with elite perks to millennials with more money than sense. Ja Rule was a music promoter, and together they came up with the idea of a luxury, elite festival on a private island previously owned by drug lord Pablo Escobar, featuring private villas, beach parties and some of the world’s top musical acts. They invited social media influencers to come along for free, and watched as the bookings – and money – rolled in. They promised gourmet food and bespoke yoga classes on the beach… but, despite the advice of experts in everything from event management to logistics, never bothered with the finer points.

The promise was enough, and if you say something convincingly enough times, and it has a hashtag, and people seem willing to pay for it, sure it’s inevitably going to happen, isn’t it? Well, no, it isn’t, as Fyre attendees who had paid thousands upon thousands for tickets not to mention extras that kept appearing nearer to the festival (as the organisers ran out of money) found out when their private planes didn’t exist, their luxury villas were soaking wet hurricane tents, water had to be delivered in trucks, incurring hundreds of thousands of dollars in customs fees, and there were food shortages to the extent that the only thing available was cheese sandwiches .

The incredible self-belief of McFarland (now jailed for fraud) and his utter determination to ignore the advice of experts is scarily familiar. From very early in the process, he was told again and again that elements of the festival – things that had already been promised to punters – were simply not going to happen. Naysayers were accused of negativity and focussing on problems.

Islanders who had rowed in with goodwill and worked hard to try and salvage the project were left unpaid and unhappy.

Watching the documentary unfold is like watching a car crash in slow motion, and scarily familiar to anyone even vaguely following the doomed Brexit process.

From day one, anybody with an even slight grasp of how the EU works has been sceptical about the promises of Cameron (remember him?), Johnson, Farage, Rees Mogg and the rest of the cheerleaders. The Tory notion of ‘independence from’ the EU, probably dreamed up in a pub near Westminster by some posh blokes, has always been about a vague idea of Britishness, return to the glory days of Empire and focusing on what rich people want. It’s never been about reality or cold hard facts.

Much like the Fyre crew, they’ve never thought about how the food gets in, about what happens in an emergency, or about who cleans up after the party. They never thought about – or simply didn’t care – how much it was likely to stiff the little guy.

Seeing MPs vote on Tuesday to ‘renegotiate’ a deal that has already been done, and on which the negotiation partner has firmly closed the door, was exactly like watching McFarland and his team of acolytes insist that they could hold their exclusive VIP event on a concrete covered wasteland with a few tents and plenty of tequila, fulfilling all manner of outrageous promises. Something’s going to happen alright, but it’s not what you’ve been selling everyone.

Instead of partying with exclusive access to big names in the music industry, chilling out on pristine beaches with fancy cocktails and relaxing in luxury villas, Fyre attendees overran supply trucks, hoarding toilet paper and ripping the tents next to them to make them uninhabitable.

Rumblings from the underbelly of the British government have suggested this kind of outcome from Brexit is not impossible – there is talk of stockpiling medicines and food, and provision is being made for introducing martial law.

These are the only real preparations that have been made in the three years since the referendum. The utter lies and the sense of unreality around it all along has meant that anyone raising little obstacles like the very real issues of the border, customs tariffs, and the right to remain, is accused by Brexiteers of being a negative remainiac, and given vague promises that it will all be ok, despite absolutely nothing being done to make it so. Fyre showed what a couple of lazy, lying millionaires can do to a group of gullible millennials. Brexit will show what they can do to a whole country. 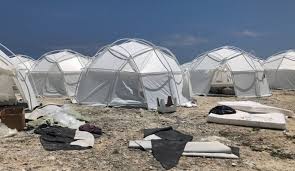