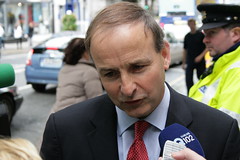 The whole episode was rather a strange one, and politicos, particularly in Cork, have been mesmerised all week. Finally, a bit of interest in a desperately gloomy and miserable Dáil term.

We had the Fine Gael heave last year, but Fine Gael has always been subject to this kind of malarky. Fianna Fáil leaders have traditionally had iron control over even the unhappiest of backbenchers, but Brian Cowen’s leadership has been marked by a distinct lack in this department.

We all knew the challenge was a sideshow, but it has been fascinating to watch Fianna Fáil implode over the last few months, and it looked like this would be the denouement. Brian Cowen’s leadership has been the ultimate slow motion car crash, and few in Fianna Fáil can even try to deny it at this stage.

Nevertheless it was hard not to feel sorry for the man. The party reached an artificial high under Bertie Ahern that it could not hope to retain and since the day he took office he has been fighting a losing battle against the economy, against his detractors, against the EU, the IMF, the Opposition, and his own demeanour.

“He reminds me of my son when he was a teenager,” said Mary O’Rourke on the radio on Monday, “when he puts that look on his face and goes into a sulk.” There is something brave in the fact that he has refused to give up. Of course, you can look at it two ways; he is either the most obstinate, pigheaded, power-hungry person that ever lived, or he is desperately trying to fix his mistakes and those of his predecessor. Somewhere in between, is my guess.

A heave would have probably been successful in the weeks following the IMF bailout, if the entire country hadn’t been so stunned, and the question of Micheál Martin’s timing is an interesting one. Why did the heave not take place earlier, when there would have been more public appetite for it?

Deputy Martin’s assertions that it became clear to him just how bad things were over the Christmas period, when speaking to other TDs and party activists, doesn’t ring true.

If he hoped to prevent electoral carnage through a simple change of leader, that would need to have happened much earlier. At this stage many people have their minds made up – maybe not who to vote for, but certainly who they won’t be voting for. But perhaps, as he says, it is Fianna Fáil members who need reassurance that there is a future for the party.

It’s hard to believe things have reached this nadir for the party once hailed as a beacon of electoral success and emulated by political parties worldwide. Republican hero Robert Emmett said “Let no man write my epitaph,” and it’s not time to write one for Fianna Fáil; Martin’s actions have signalled loud and clear that he sees a future for the party, and he feels he is that future. But it might be time to write the epitaph of Fianna Fáil as we know it.

Given the polls and stories circulating about some Fianna Fáil TDs being spat at and assaulted on doorsteps it’s hard to see anything but a wipeout in the immediate future of many of the party’s TDs. However, as a smaller party, in Opposition, and with less requirement to appeal to every interest group in every constituency, perhaps Fianna Fáil might recover some core values.

This appeared in last week’s newspaper – my how time flies!