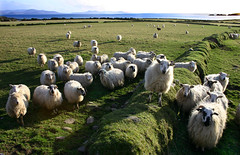 Reading about the Nyberg report into the banking collapse, I was struck by one of its main findings; that a lack of critical debate about the boom in Irish society led to a herd mentality.
Teachers, particularly at third-level, have been clamouring for years at the way our education system encourages lemming-like behaviour. The system does not encourage us to think for ourselves, to problem solve, to examine critically a theory or belief. Instead, children learn by rote and repeat without questioning the ‘wisdom’ of their elders. Teachers of new third-level entrants in our colleges despair at their students’ inability to question or to learn independently, and, often, this ability never develops because it is left too late.
Our highest achievers, the ones who get the most points, and who end up in prestigious jobs in law, accountancy, auditing, business, medicine – in other words, the elite – are merely proven to be the best at rote learning. They are the ones running the place and they have been educated purely to believe and repeat what they are told.
A questioning nature is not innate; it is nurture, not nature, that causes us to be investigative, critical and skeptical.
So the Nyberg report’s highlighting of ‘groupthink’ and a ‘herd mentality’ leading to the greatest self-inflicted catastrophe in Irish history is instructive. Many commentators have previously alluded to this, but having it laid down on paper will, hopefully, be useful. Particularly having it laid down on paper by an expert, who isn’t Irish, because the same herd mentality has led us to be deeply dismissive of our own critics, like David McWilliams and Morgan Kelly, both of whom predicted the bust.
Irish culture actively discourages whistleblowers.
The recent Garda ‘rape tape’ in Mayo was a terrible indictment not just of ignorance among the Gardaí, but of a weakness of character that is replicated in all sectors of Irish society. There is nobody who will stand up and say ‘that is wrong’.
Not one of the Gardaí in that car said ‘that’s enough’ when the rape joke was made, and repeated, and not one of our leading politicians (including the then Opposition, now Government) shouted ‘stop’ when the Government pumped the property market further and further.
This should be the last report.
What we need now is results. While I agree with Mr Nyberg’s findings that a majority of people in the country did not want the party to end, I think we already knew that.
We need to tackle both the roots and the results of what has happened to us.
The few who instigated the disastrous bank guarantee scheme and wilfully fooled an unprepared and under-educated government into putting the country in hock should be punished properly, and if that takes a referendum to allow parliamentary scrutiny, so be it.
But to tackle the roots we need to change the culture that operates here. Our children must be taught that questioning is good and that learning is a matter of opening your mind to all the possibilities and not accepting the first one presented. Only by changing how we think can we prevent this happening again.