A hundred years is a blip in the history of humanity, but for most people, the end of World War One feels like a remote historical event. The decade of centenaries in some ways makes it feel like ancient history – a pity, because we make the mistake of thinking history does not repeat, and progress is inevitable.

In my family we think of the Great War as a recent affair, because it’s just one generation from living memory. Over the past four years I have thought often of my grandfather, Leo Lyons O’Shaughnessy. I never met the man whose helmet hung from a hook in our pub and whose medals I found as a child, hidden away in a drawer in a room we rarely used. 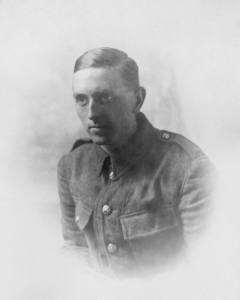 My grandfather, Leo Lyons O’Shaughnessy, pictured in 1914. Thanks to Dave Santorum for his brilliant photo restoration skills.

He signed up with the East Kents, the Buffs, in Fermoy in early 1914, aged just 18, and he spent almost all of the war at the Western Front. He was unlucky enough to participate in some of the bloodiest battles of the war, but lucky enough to survive them all. He returned in 1919 to a place vastly changed – and to a job, secured for him by his father in his absence, as a court clerk, employed by the British Government.

In 2014 I went with my Dad to explore some of the places Leo would have seen during his four years in uniform. The rolling fields of Northern France are still pitted with craters, marked with crosses and monuments to the slaughter they hosted, but their serenity belies the deafening, blinding, suffocating hell of mud, blood and explosions captured in footage from the time.

With the centenary of Armistice Day, and the turbulence of current political relations between Ireland and our nearest neighbour, I am thinking once again of the young lad who went from a scenic mountaintop village in Co Limerick to the hellish lowlands of Belgium and France, witnessed the ultimate barbarity of man to man and returned to a country entirely changed.

The death this year of Leo’s son, my uncle Charles, and the birth of my second son are further reminders of the distance between his time and ours, but thinking of my sons, and what lies ahead of them in a time that is surely as politically turbulent as a century ago, I think of Leo’s mother and all the mothers whose sons went to fight and die in the deadliest war. They too gazed at their babies and watched with pride as they walked, and talked and played… and watched, helpless as they were sent away to suffer for the foolish pride of cowards and liars.

I am thinking about what happened when he came home, and of the relationship of every Irish person with our nearest neighbour, as complex now as it was a century ago although we have gained so much. 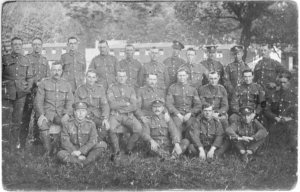 Leo came home to an Ireland vastly changed from the one he had left. We don’t know whether Redmond’s urgings had anything to do with him joining up – the family consensus is that he probably just needed a job and an adventure – but by the time he returned from four years in the trenches, home was a different country.

Navigating this new place wasn’t easy for many veterans of World War One, with the tide of public opinion having turned in their absence. Leo was granted land in recognition of his service, in common with many other demobbed servicemen.

His war experience and training were highly sought after – he was a gunner, and of course had returned with a weapon. Many of his family members were involved in the Republican movement locally, but he trod a fine line as a local Clerk of the Petty Sessions, which operated in competition with the illegal but locally favoured Sinn Fein courts. He cooperated with the Sinn Fein court in sensitive matters, according to an account of his activities described by his brother Dan to the Bureau of Military History many years later.

To a man returning from the horrors of trench warfare, of mustard gas and bayonets and deafening explosions, perhaps facing down armed RIC men from one’s own front door during a raid was a cakewalk. Or perhaps it was another trauma to add to a litany of unspeakable sights. We simply don’t know, because he never spoke of the war to his children, who came after he married at the age of 50.

The story of my grandfather and the 200,000 men like him is a typical story of Ireland and England. 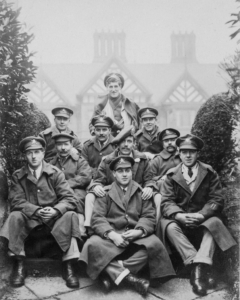 My grandfather and other soldiers pictured at a convalescent home in Birkenhead, 1917.

Our histories are inextricably intertwined, for good and ill. He suffered in another country’s war, but one he willingly joined up for, if that can be said of any soldier who found themselves in the hell of a war they could not understand and the scale of which they could never have imagined.
He came home and fought – sometimes with pen and paper, and at least once with a revolver – against the forces he’d once identified with. He was born a British subject and became a citizen of the Irish Republic.

At different times in his life my grandfather was a Victorian, a child of the Empire, a Tommy, a Paddy, a soldier, a shopkeeper, a British subject, an Irishman, a confirmed bachelor and a husband and father. Like everything about the Irish relationship with Britain he was a walking contradiction. It is worth remembering that, now, as Brexit approaches and we regard our neighbours with resentment, and worse.

The State has done a good job, at the centenary commemorations, of remembering Leo and men like him. They deserve to be remembered. Not because there is anything glorious or great about war.

But because the men who fought in World War One experienced humanity at its most evil, and came home with their humanity intact, to live with love and kindness and gentleness again. That’s heroic. That’s worth remembering.

On Armistice Day I thought of all the men who didn’t come home and the mothers who mourned them. But I also thought of Leo and of all the other the men who did, who returned to live with gentleness and love after witnessing such evil, and who made their own lives and ours peaceful and safe.

Published in the Evening Echo, November 2018.